In February, in the Bay of La Paz, Baja California.

We saw 2 juveniles; about 4 and 5 meters in length. The crew (Eduardo, Freddie aka “Freduardo,” and Pablo, recognized one of the sharks as Ana, supposedly a regular in the area. Then again, we were tipped off that maybe that’s a good thing to say to tourists? She was happy to let us swim alongside, swam more slowly than our first friend, and even rolled on her side, exposing her belly.

They’ve begun regulating who can go out and swim with the whale sharks; nowadays only authorized tour boats can go for these visits. As our requisite whale shark expert, Pablo, said, “We are the flies at the buffet. Let’s try not to be too annoying.”

Of course, no touching is allowed – about a person’s length of distance is recommended. It’s also good to avoid swimming above the whale shark, which will cause it to dive down, making it harder for you and the other humans to follow. With a respectable distance, they’ll largely maintain their course, calmly swishing their large tails back and forth while you kick at a steady pace to catch up.

And it is a fairly steady pace! I was surprised that I had to kick fairly hard to keep up with our first friend. Teenage Freddie swam the whole time with his fist in the air to mark the location of the shark, whilst we sedentary tourists took shifts hopping between the boat and the water. Then again, I was also super excited, clutching my GoPro, and trying to dive down and swim next to the shark. Either because my muscles warmed up, or because it was more relaxed around humans, the second shark was a lot easier to keep pace with.

Apparently luckier folks get to see clusters of them together, in clearer water, but this was still pretty great. They have such tiny eyes! and they are so chill!

Back at home, a video of a less happy whaleshark crossed my feed. Apparently some Chinese (of course) fishermen decided it would be cool to saw a whale shark into cross sections … from tail to head. Meaning it was alive for a long time while this was happening. Humans should not get nice things. [sad link]

At last year’s SF International Ocean Film Festival, I saw a documentary about whale shark tourism in the Philippines. It considered 2 very different whale shark experiences that a tourist might have – one, like ours, takes people out on a boat to try to spot sharks and swim near them. The other, at Oslob, is much more reliable, but also more questionable. Locals regularly feed the sharks, and there is direct contact between sharks and boats, and sharks and people. Accordingly to the film, the interactions have changed whale shark behavior and keeping them around when they would naturally migrate. The tour operators actually buy shark food from other islands, since they can’t catch enough anymore.

For those who don’t know, whale sharks eat plankton and small sea creatures they hoover up in their mouths – much like manta rays. Apparently there’s a whole lot we don’t know about them. They give live birth, but no one has ever seen it happen! We have no idea how deep they can dive beyond Really Deep.

Elaine doesn’t swim, and we didn’t want something too time consuming (canyoning) since Sarah wouldn’t be joining, so that left us at the Shotover Canyon Swing.

I am, at heart, a big wuss. But I felt like I had to do it. Mostly because Elaine was doing it, and I have this unfortunate competitive streak. Especially in matters of gutsiness. Gutsiness which was slowly eroded by subtle cues as we progressed from purchase to jump.

Basically, you stare over a precipice while your throat goes dry, jump/get kicked off the edge, drop for 60 feet … which ends up being way more fun and delightfully like flying than you expected.

Quicker than you realize, the swing kicks in (quite gently) and you seem to be soaring over a canyon.

Just you, the canyon, the blue sky, the warm sun.

Quite peaceful really. Why were you even freaking out 3 seconds ago?

This thing was really fun.

Elaine and I both ponied up for a second round with very minimal deliberation.

The way this works is you pick what fancy way you want to plummet over the edge. There’s the pin drop, where you stare at your feet as you go down, with your hands tied behind you. There’s the lawn chair that you get strapped to as they tip you over slowly (Elaine did that one). There are forward somersaults (I tried this the first time and ended up just, um…running off the edge), which I successfully got in a couple of the second time. If you want to go, try to go during lunchtime. It’ll be less crowded, so you’ll have more attention and more options and more time, meaning that discounted second round is actually a possibility.

As we drove to Queenstown, I had low expectations. Everything I’d read described the city as a place with any adventure for sale, which smacked of cheesy tours and amusement park rides.

It has that, but in a setting of such honest, beautiful scenery, such that you fall in love anyhow. (It doesn’t hurt that they have a killer chocolate shop con churros y wifi, mighty tasty burgers, and the nicest hostel I’ve been to.) While posted in every shop window, the “adventures” weren’t blared in neon, nor pushed by money-grubbing touts. It was all quite civilized, and consequently…inviting.

Elaine really wanted to do some sort of adventuring. Sarah didn’t. I was feeling ornery and noncommittal about joining Elaine, but then I had breakfast. Breakfast (food) somehow has this magical effect of making the world (and the Shotover Canyon Swing) seem so much more full of promise.

I happily found some methyl alcohol to fuel my stove for our upcoming hike, and some fun Tim Tam flavors to haul home. (Sidenote: I like Oreos, but Tim Tams >>> Oreos)

Also, I did mention the burgers? Let’s see some burger. 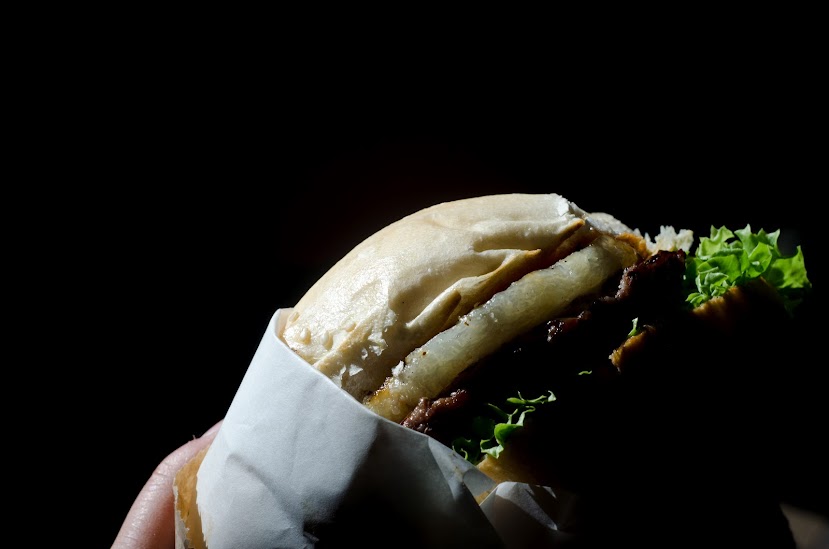